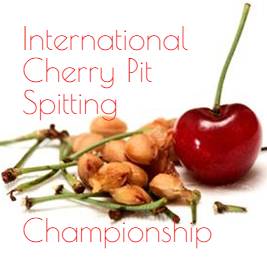 July 2, 2016, is the 43rd Annual International Cherry Pit Spitting Championship, held each year in Eau Claire, MI, on the first Saturday of July. Tree-Mendus Fruit Farm hosts this event, calling it a “Spit-tacular Day” where you can “spit your pit in public with only a minimal loss of dignity while gaining fame.”
It’s the only cherry pit spitting contest recognized by the Guinness Book of World Records. (In case you’re curious, the world record belongs to Brian “Young Gun” Krause, 37, of Lansing, MI,  who spat his pit a whopping 93 feet 6½ inches in 2003.)

There are some interesting ground rules. The spitting range is available for practice spitting from 10:00 a.m. until noon. Those wishing to practice are limited to a maximum of three spits.

No foreign objects may be held in the mouth which would give an advantage in spitting the pit. Denture racks will be provided for those wishing to remove their teeth.

We assume organizers accept no responsibility for lost property due to someone mistakenly taking the wrong dentures after the contest or intentionally grabbing someone else’s because it’s a nicer set of choppers. (Note: The perpetrator will be the person who never smiles when you’re around.)

Contestants must select three cherries from the regulation variety (Montmorency) supplied by the tournament committee. Cherries must be washed and chilled to 55-60°F pit temperature.

When called by the tournament judge, the contestant has 60 seconds to insert the whole cherry, chew and swallow everything but the pit and get to the line. No part of the cherry may be removed after insertion. The spit is forfeited if a pit is swallowed. Hands must stay below the shoulders to prevent popping one’s cheeks.

Spitters must stand flat on the ground — or ground level platform — to spit. Spitters are prohibited from using any kind of mechanical or other device to improve body thrust or spit length (including hydraulic hoists, wall support, etc.)

The contest is serious business. In addition to a distance judge, line judge, timekeeper and scorekeeper, there is an official tournament judge, honorary judges, an emcee and announcer—described as spit-by-spit announcer and color man—and a pit sweeper, which has our vote for least glamorous duty.

The first champion back in 1974 was Dan Kingman of Dowagiac, MI, with a distance of 41 feet. In 2015, Megan Ankrapp of Buchanan, MI, took the prize with a spit of 49 feet ¼ inch. Who will break Guinness Book’s world record? Do you have what it takes? It’s never too late to start practicing, preferably outside, where it’s less messy. 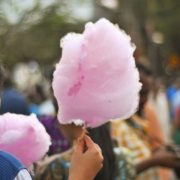 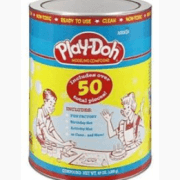