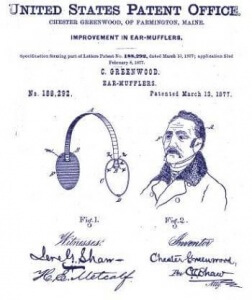 Even if you’ve never heard of Chester Greenwood, chances are, he’s been keeping your ears warm for years. Greenwood was born on December 4, 1858, in Farmington, Maine.

At the age of fifteen, he fashioned the first pair of earmuffs, with his grandmother’s help, from wire, beaver fur and velvet.

He was awarded a U.S. patent for his “ear-mufflers” in 1877.  By his mid-20s, 50,000 pairs of Greenwood Champion Ear Protectors were being mass-produced annually at a local factory.

He accumulated over 100 more patents for such diverse inventions as a mechanical mousetrap, steel-toothed rake, donut hook and a shock absorber that became the basis for a component of airplane landing gear.

Farmington became the Earmuff Capital of the World. By 1937, when Greenwood died, his company had its best year ever, selling 400,000 pairs.

In 1977, the state of Maine declared December 21—the first day of winter—Chester Greenwood Day. Farmington parade organizers moved it to the first Saturday of December because it is closer to Greenwood’s birthday, provides a slightly better chance of mild weather and always falls on the weekend so families can attend together.

Recent parade themes have included 2016’s “Holiday Celebrations around the World” and 2015’s “Favorite Characters.” All are welcome to participate, as long as they have a flat-bed truck and giant earmuffs. Floats without them are disqualified, which means that everything from a Nativity scene to a Spongebob Squarepants sock hop must sport a huge pair of these: 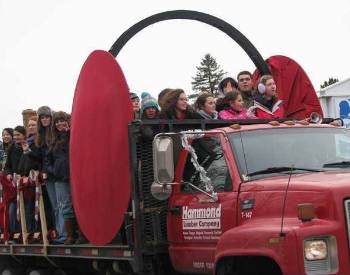 All floats are judged on originality, appearance, and quality of onboard performances. There are a couple more guidelines on the submission form.

Floats, or any other units, advocating, opposing or depicting any social issues are subject to approval of the Chester Greenwood Day Parade Committee. Entries by political (ballot) measures supported or opposed by individuals, groups, political action committees or by any other form are not allowed.

The Parade Committee reserves the right to withdraw any unit of which the costume or performance does not meet these rules and regulations, or does not conform to the standards of reasonable public behavior.

One more thing: Throwing candy from any float is forbidden as this may cause children to run into the street and be struck by extremely slow-moving parade vehicles. (Flying sweets also pose a risk of eye injury to paradegoers not wearing glasses.) Anyone throwing anything from any entry will result in everyone on the float being banned from the parade for life.

Now, get out there, have fun and celebrate the man who invented ear hats! 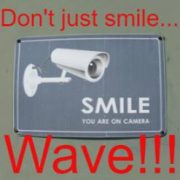