Today is Ice Cream for Breakfast Day, a holiday invented in 1966 by a mother desperate to amuse her children while they were snowed in during a blizzard in Rochester, NY. Unsurprisingly, it was a hit. Since then, its popularity has grown exponentially, circling the globe.

As Florence Rappaport explained to the Washington Post in 2004, “It was cold and snowy and the kids were complaining that it was too cold to do anything. So I just said, ‘Let’s have ice cream for breakfast.'” The next year, they reminded her of the day and the tradition was born.

When her kids grew up, they continued to celebrate with parties at college and word of the holiday spread. Later, their children carried the message while traveling the world. Since then, Eat Ice Cream for Breakfast Day has been observed in Canada, Peru, Switzerland and Costa Rica.

In 2009, it was featured in the Chinese edition of Cosmopolitan magazine. Israeli newspaper Haaretz reported on it, first in Hebrew in 2013, then in English in 2014. No matter where it occurs, the holiday’s rules are simple.

If you still need inspiration, consider this quote from playwright Thornton Wilder:

My advice to you is not to inquire why or whither, but just enjoy your ice cream while it’s on your plate.

What are you waiting for? Grab a spoon and eat ice cream for breakfast! (Have we mentioned that it’s always breakfast-time somewhere and even McDonald’s serves breakfast all day? Breakfast is whenever you decide it is!) 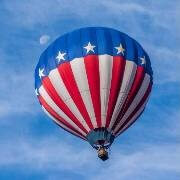 January 9 is Aviation in America Day