Today is Liberace Day. It commemorates the death of Władziu Valentino Liberace (May 16, 1919 – February 4, 1987), the American pianist, singer and entertainer known as Mr. Showmanship.

He had begun playing piano at four years old and by the age of thirty became the highest-paid entertainer in the world, touring internationally, releasing albums, appearing in movies and on television and doing lucrative product endorsements. 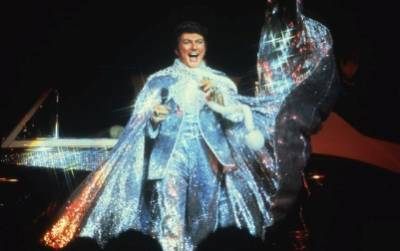 Liberace won two Emmy Awards, earned six gold albums and received two stars on the Hollywood Walk of Fame. He released an autobiography and set box-office records at Radio City Music Hall for 56 shows he performed only a few months before his death. His stage costumes, pianos, cars and homes were flashy paeans to excess. “Too much of a good thing is wonderful” became his motto.

His flamboyance fueled gossip and speculation about his sexual orientation. Liberace publicly denied his homosexuality, giving interviews about his ideal woman and appearing with Maureen O’Hara, Mae West, Judy Garland and others to give the impression of romantic involvement. Betty White spoke in 2011 about being set up by his manager to attend premieres as Liberace’s date, knowing full well that he was gay. 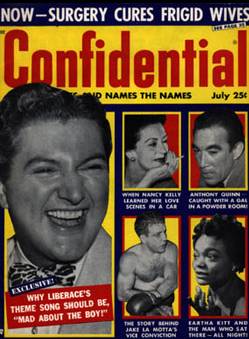 The women acted as “beards,” helping to conceal the performer’s homosexuality. It was a necessity in those days to avoid scandal. Until very recently, it was unheard of to “come out” without risking the destruction of one’s career. A leading man would lose his female fanbase, be branded a pervert and never work again.

Liberace appeared to be an easy target. But when gossip rag Confidential and newspaper Daily Mirror ran hateful articles about Liberace’s relationships with men, he sued them and won. Although he was fighting to stay closeted, he was also fighting for everyone’s dignity and right to privacy. He may not have known it, but he was battling against the expressions of homophobia considered acceptable in the press and life in general. 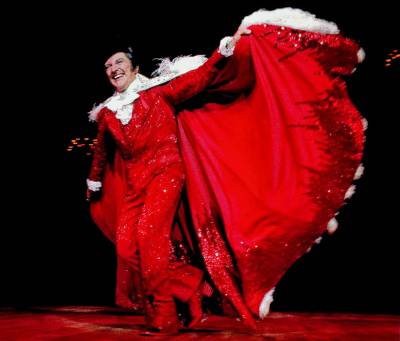 Rumors circulated for years that he had HIV. After his death on February 4, 1987, his physician claimed he had died of heart failure due to degenerative brain disease.  Two days later, the request for a routine burial permit was rejected by the Riverside County coroner’s office, and his body was ordered to be delivered for an autopsy.

According to California law, anyone suspected to have died of a contagious disease should be autopsied. Had this law been followed rigorously, the coroner would have been working non-stop dissecting anyone who’d died with the sniffles. How Władziu Valentino Liberace presented a public health hazard at that point is unclear. He’d already been embalmed.

Tests concluded that Liberace had died of cytomegalovirus pneumonia due to AIDS. His depressed immune system couldn’t fight the illness. Was the autopsy necessary? Was it done for spite, to tarnish the reputation of a dead man? Was it done because of the fear of AIDS, or prejudice against gay men? Was it done to right the wrong of a physician falsifying a death certificate? Or all of the above? 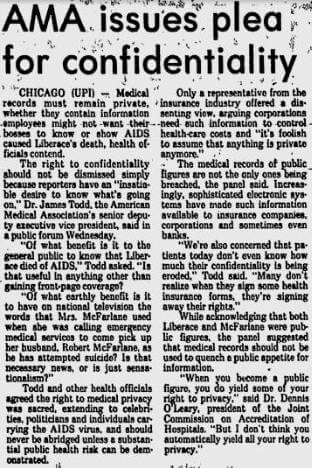 In reaction to media frenzy, the American Medical Association called for the confidentiality of all patient records. In any case, Liberace the man was beyond humiliation at that point. His body was returned to Forest Lawn Cemetery, where he was buried beside his parents. He bequeathed the bulk of his estate to the Liberace Foundation, which preserves a collection of his costumes and provides scholarships for students of the creative and performing arts.

Many of us got our first glimpse of fabulosity when we watched him as kids, before we knew what “gay” was. He was a talented and funny showman, completely at home in rhinestones and sequins, who seemed to be thoroughly enjoying himself at all times. If you’ve never seen him play, check out his reinterpretation of Mack the Knife and check out this short compilation from Time: