On February 3, 1959, musicians Buddy Holly, Ritchie Valens, and J. P. “The Big Bopper” Richardson were killed when their plane crashed in an Iowa cornfield. The tragic accident became known as “The Day the Music Died,” after a lyric in singer-songwriter Don McLean‘s 1971 anthem American Pie. 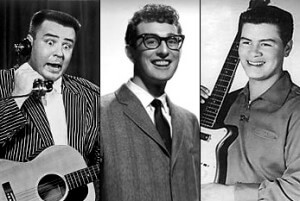 At the time, they were on their way to a gig in Moorland, MN, a stop on their “Winter Dance Party” tour of the Midwest. Waylon Jennings, Tommy Allsup, and Dion DiMucci were on the way there on a school bus.

The tour began in Milwaukee, WI, on January 23, 1959. The first tour bus they rented was unequipped for the freezing winter weather. Due to the long distances between venues, everyone was stuck on the bus for many hours at a time.

The heater on the bus broke down. Drummer Carl Bunch suffered frostbite on his feet and was hospitalized in Ironwood, MI. The tour bus was replaced with a school bus and Bunch was left behind. Holly, Valens, and DiMucci took turns playing drums for each other at the performances in Green Bay, WI, and Clear Lake, IA.

By the time they reached Clear Lake on the evening of February 2, Holly was frustrated and decided to charter a plane to take him to Fargo, ND, after the show. The bus could then pick him up for the performance in nearby Moorhead, MN, sparing him hours of misery and allowing him to get some rest.

The four-seat Beechcraft 35 Bonanza Holly chartered was not named American Pie as many surmised from McLean’s song. It was known only by its registration number, N3794N. Except for a change in DiMuccio’s recollection timed to his book release more than 50 years later, the other survivors have always agreed on how the two remaining passengers ended up on that fateful flight.

The seats were meant for Holly’s bandmates Jennings and Allsup.  Along with Carl Bunch, they had formed a group after Holly left his band The Crickets. Holly felt responsible for convincing them to come on this miserable trip. Valens asked Allsup for his seat on the plane. He initially refused before agreeing to a coin toss to determine who would fly and who would take the dreaded bus. Valens won. Richardson had the flu so Jennings gave up his seat. 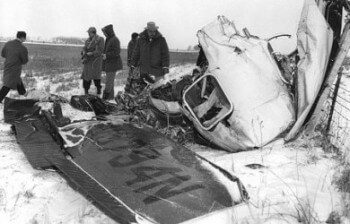 The cause of the crash has been under investigation on and off ever since. It was initially blamed on the poor judgment of the 21-year-old pilot, who was not yet qualified to fly using instrumentation in conditions of poor visibility. But it was also found that warnings about worsening weather weren’t relayed to the pilot before he took off in light snow.

In early 2015, the National Transportation Safety Board (NTSB) was petitioned to reopen the case and look for evidence of mechanical failure as well as proof that the pilot had made a heroic attempt to land. (The latter is unlikely as the plane hit nose down at 170 miles per hour.) In May 2015, the NTSB announced it will not reopen the case.

It’s a somber occasion to remember the death of these rock and roll legends but also an opportunity to celebrate the music they brought into the world. Listen to some of their hits today. It’s one way to keep the music alive.