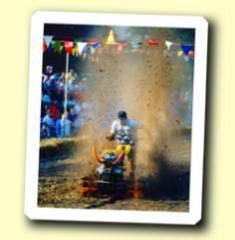 June 25, 2016, is the World Championship Rotary Tiller Race, the main event of the PurpleHull Pea Festival in Emerson, Arkansas. In 1990, Emerson native and part-time newspaper columnist Glen Eades decided his hometown needed a little excitement. As he explained, “We were so boring we didn’t even have a cop.”

He approached Mayor Joe Mullins about hosting a festival to honor a southern favorite grown in many local backyards: purple hull peas. Several town meetings were held to discuss the idea and somewhere along the way, Eades suggested a rotary tiller race. Mullins remembers thinking, “Glen, I don’t know what you’ve been drinking, but you need to change brands.” The plan was approved and the PurpleHull Pea Festival became a reality.

Since then, it has grown in size and stature, winning the 2001 Arkansas Festival of the Year Award. Over the years, the World Championship Rotary Tiller Race has evolved, too. Its website proclaims:

Following a brouhaha cryptically referred to as the “Great Tiller Racing Controversy of ’93,” festival organizers created the World Tiller Racing Federation to write and enforce official rules governing all races. One such rule dictates that the racetrack must be exactly 200 feet in length. Another requires that racers, called tiller pilots, wear shoes. (Believe it or not, up until that point, some chose to compete in bare feet.)

The event has become so famous that The Wall Street Journal has sent a reporter to cover today’s race for its column on odd topics. In recent years, the festival’s Antique Tractor Show & Competition has held two races of its own: the Barrel Push, which is pretty self-explanatory, and the Slow Race, in which contestants try to keep the tractor running at the lowest possible speed without stalling.

The PurpleHull Pea Pageant judges age groups from 0-11 months all the way to 16 years and up. According to the signup sheet, “Contestants will be rated on Facial Beauty, Stage Presentation/Personality and overall appearance,” winners of “Side Awards: Most Beautiful, Photogenic, Fashion, Prettiest Hair, Prettiest Smile” will receive a trophy, and “All Queens will receive a Nice Crown, Sash & Trophy.”

Zero months? We’re going to go out on a limb and say that if your daughter’s too young to hold up her own head with or without a crown on it, she’s probably too young to enter in a beauty contest. Your time would be better spent making sure your husband keeps his shoes on for the race.

To raise money, each year festival organizers choose a group of “Tiller Girls,” teenagers who roam through the crowd watching the race. According to the site,

They’re there for two reasons.  First, for visual stimulation.  Second, to take up donations. The Tiller Girl who collects the largest total amount of donations earns points toward winning the title of Tiller Goddess.

Oh, thank goodness. We were worried it might be something creepy.