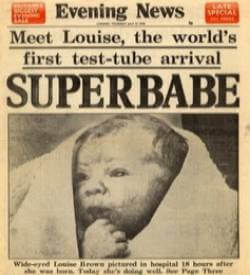 Today is Test Tube Baby Day. On July 25, 1978, in Oldham, England, Louise Joy Brown became the first person born after being conceived outside her mother’s body, in a revolutionary process now called in-vitro fertilization, or IVF.

In IVF, egg and sperm are placed together in a liquid with some smooth jazz and Bacardi 151; after the egg has been fertilized, it is transplanted into a woman’s uterus. (We’re kidding about some of that.)

The media’s description of Louise as a “test tube baby,” evocative of heretical work performed by mad scientists, was widely adopted but technically inaccurate. Her conception took place in a petri dish.

At the time, her parents knew the procedure was experimental but were unaware that it had never resulted in a baby. This called into question their ability to give informed consent and the ethics and motives of the doctors involved. Disciplinary action might have been taken had Louise not been born.

IVF has become an accepted treatment for infertility. By 2006, the World Health Organization reported that more than 1.5 million children had been conceived via the process. In 2010, Robert Edwards, one of its developers, received the Nobel Prize in Medicine. 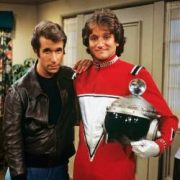 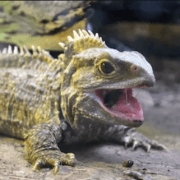 May 2 is Tuatara Day