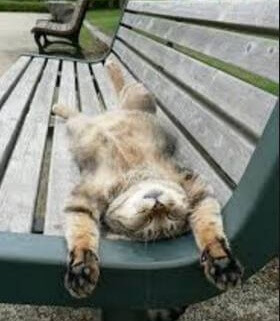 Today is National Public Sleeping Day, not to be confused with Festival of Sleep Day on January 3rd.

Cats are known for taking short naps and waking quickly to flee a predator or pounce on prey. Those who have cats can attest to the fact that cats sleep a lot, an average of 15 hours per day, according to petMD. They are most active at night so, when the bipedal world is getting up, they’re settling in for a snooze.

We can approximate a catnap with the “power nap.” According to sleep expert Sara C. Mednick, Ph.D., author of Take a Nap! Change Your Life, “You can get incredible benefits from 15 to 20 minutes of napping. You reset the system and get a burst of alertness and increased motor performance. That’s what most people really need to stave off sleepiness and get an energy boost.”

Longer naps have benefits, too, but don’t lend themselves to public situations. For instance, you might miss your stop on the train or bus, sleep through getting fired for sleeping at work or come to on a park bench having unwittingly donated your watch, wallet and shoes while you slumbered.

Sleep architecture researchers define the power nap as stage 2 sleep. Most of us are familiar with Rapid Eye Movement (REM) sleep; this very short sleep cycle is classified as Non-Rapid Eye Movement (NREM). According to a National Institutes of Health (NIH) study:

An individual in stage 2 sleep requires more intense stimuli than in stage 1 to awaken. Brain activity on an EEG shows relatively low-voltage, mixed-frequency activity characterized by the presence of sleep spindles and K-complexes. It is hypothesized that sleep spindles are important for memory consolidation.

K-complexes appear to prevent interruption of sleep due to touch, sound and other stimuli judged by the sleeping brain to present no threat. They also aid in information processing, help to synchronize NREM activity in the thalamus and promote a slow-wave sleep state. (More science here.)

While the effects of caffeine are researched, debated and studied some more—the NIH lists 72 open clinical trials involving caffeine—everyone agrees that a little shut-eye will do you a lot of good. Keep in mind that our circadian biological clock rhythms tend to make us most sleepy between 1 pm to 3 pm.

Naps longer than 30 minutes can paradoxically make you feel groggy. This effect is called “sleep inertia” and happens when you awaken quickly from deep sleep. Psychological and motor skills are impaired for minutes or longer, especially if you’ve had insufficient sleep the night before.

Dark surroundings will help you fall asleep more quickly and get more out of your downtime. If there’s nowhere at work to turn off the lights and close the door or it’s too cold, hot, rainy or snowy to go outside and lounge with a TPS report over your face, check out the Ostrich Pillow. 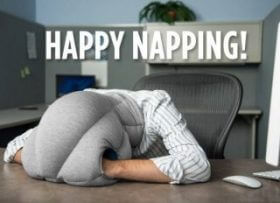 There’s no better way to let your cubicle mates know they should come back later, get everyone to come look at you, post a photo companywide, worldwide, to the International Space Station, start a therapy fund…or all of the above!

A nap can’t replace a good night’s sleep, but it can sharpen your senses and keep you going until quitting time. Unless you’re a cat. Then it’s always quitting time.

March 2 is Read Across America Day
Scroll to top