Today is Cow Milked While Flying in an Airplane Day.  This self-explanatory holiday commemorates the first documented flight of a cow. (It’s possible one snuck aboard an earlier flight disguised as a businessman but we can’t confirm it.) On February 18, 1930, a cow known as Nellie Jay to locals in Bismarck, MO (then Elm Farm Ollie to fans of bovine aeronautics), boarded a plane bound for the International Aviation Exhibition in St. Louis, Missouri. 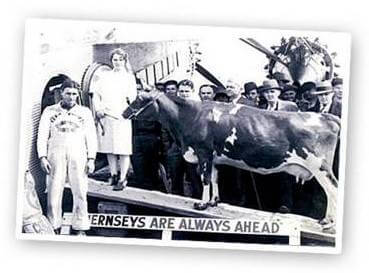 Legend has it that the Guernsey cow was chosen for her high milk production: she required milking three times a day for a total of 24 quarts. She also was selected because of her docile, agreeable nature; loading a half-ton cow onto a plane was difficult enough without adding a surly disposition into the mix.

She was helped onto the Ford Tri-Motor aircraft, accompanied by Wisconsin native Elsworth W. Bunce, who would soon become the first man to milk a cow in flight. (It’s never been attempted during space flight, perhaps because of the potentially catastrophic effect of quarts of milk droplets in zero gravity.)

The feat was supposedly done to allow scientists to observe mid-air effects on animals.  A St. Louis newspaper stated the flight would “blaze a trail for the transportation of livestock by air.” However, there is no evidence of a scientist being onboard.

As a publicity stunt, it gained epic proportions. Nellie Jay produced 24 quarts of milk, which were packaged into paper cartons and parachuted to spectators who’d gathered along the route to watch the historic flight. Charles Lindbergh reportedly drank a glass of it.

There are a few minor problems with this story which has been, ahem, milked for all it’s worth in books, on historical websites and blogs. First, the trip was only 72 miles long. The Ford Tri-Motor has a normal cruising speed of 90 miles per hour. We know the cow was a statistical outlier for her ability to produce 24 quarts per day, but how could it produce that in such a short flight?

Maybe the plane just flew back and forth on the run or circled around for hours so there would be more time for her to do her thing? The Ford Tri-Motor can carry a total of 345 gallons of fuel. At cruising speed, the fuel burns at up to 75 gallons per hour. The tanks would be dry in a little over 4.5 hours, still not enough time for Nellie Jay. It would have required a mid-air refueling.

St. Louis weather in February 1930 ranged from a low of 20° to 81° Fahrenheit, so it’s possible that people would have gathered outside to watch aviation history and get the chance to drink some warm sky milk. But we can’t find any news source that publicized the route. And again, we’re stuck with the implausibility of the airborne cow expressing milk at such a high rate.

And the stuff about Lindbergh? He could have been there. We’ll let you know once we’ve combed through every biography of the aviator for news of his participation in dairy history. Until then, we have the photo of Nellie Jay aka Elm Farm Ollie about to board the plane. After her flight, she was also called Sky Queen. One more and she could have had a name for each of her four stomachs. She lived to be ten but her fame lives on.

Have a happy Cow Milked While Flying in an Airplane Day!