You know who you are.

Today is National Whiner’s Day, established in 1986 by Reverend Kevin Zaborney as a humorous reminder (on this day infamous for its volume of gift returns) to appreciate what we have.

Each year, Zaborney crowns the Most Famous Whiner of the Year. Winning whiners in years past include Kanye West, Lindsay Lohan, Chris Brown and Rob Ford. (Mr. Ford, a former mayor of Toronto, Canada, and avid crack enthusiast, died in March 2016, disqualifying himself from future contention for the title.)

The award for MOST FAMOUS WHINER of 2016 went to Toblerone Swiss Chocolate Makers. The announcement seemed a bit anticlimactic until Zaborney explained his rationale.

“The makers of Toblerone whined their costs have risen, and as a result, they chose to reduce the amount of product maintaining the same cost for less product. They are not the only maker that did this with some makers choosing to instead raise their prices to maintain the same amount or quality of product.”

The MOST FAMOUS WHINER of 2015 remains more relevant to most of us. The winner was—wait for the drumroll, please, and do your best to feign surprise—

In an August 2015 interview on CNN, Trump stated. “I do whine because I want to win, and I’m not happy about not winning, and I am a whiner, and I keep whining and whining until I win.”  The National Review described him as “the most fabulous whiner in all of American politics.” As we now know, it’s a tactic that’s gotten him all the way to the White House. (Hopefully, there’s a law on the books that prevents changing the color.)

Journalist Chris Thompson once wrote that these days we have far too many whiners and too few huggers.  That’s why in 1986 Zaborney also created National Hugging Day, which is celebrated worldwide every January 21st. That’s something you can celebrate every day of the year! 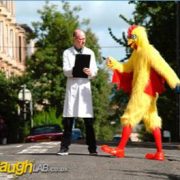