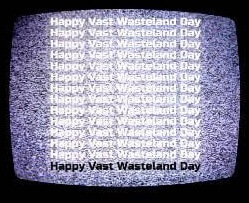 Today is Vast Wasteland Day. On May 9, 1961, Federal Communications Commission (FCC) Chair Newton Norman Minow gave a speech at the National Association of Broadcasters convention, chastising television programmers for their failure to serve the public interest.

First, a little backstory on Mr. Minow is in order. He was born in Milwaukee, WI, on January 17, 1926. He served in the U.S. Army during World War II, earned a law degree in 1950, then spent a year as a clerk for U.S. Supreme Court Chief Justice Fred M. Vinson.

The following year, he was hired by Adlai Stevenson, worked on the Illinois governor’s two presidential campaigns and became a partner in his law firm. He campaigned for John F. Kennedy before the 1960 election. In 1961, President Kennedy appointed Minow as the chair of the FCC.

When television is good, nothing — not the theater, not the magazines or newspapers — nothing is better. But when television is bad, nothing is worse. I invite each of you to sit down in front of your television set when your station goes on the air and stay there for a day without a book, without a magazine, without a newspaper, without a profit and loss sheet or a rating book to distract you. Keep your eyes glued to that set until the station signs off. I can assure you that what you will observe is a vast wasteland.

You will see a procession of game shows, formula comedies about totally unbelievable families, blood and thunder, mayhem, violence, sadism, murder, western bad men, western good men, private eyes, gangsters, more violence, and cartoons. And endlessly, commercials — many screaming, cajoling, and offending. And most of all, boredom. True, you’ll see a few things you will enjoy. But they will be very, very few. And if you think I exaggerate, I only ask you to try it.

The dated reference to stations signing off will be familiar to anyone old enough to remember the image of an American flag billowing to the strains of the national anthem, followed by a test pattern or color bars. Or to those who woke up on the couch to the sound of static, bathed in the glow of the spooky, Poltergeist-y snow that instantly made you feel there was someone waiting in the shadows, brandishing an axe.

Other than that, the speech could be given today. It would probably be met with a resounding, “So what?” rather than the ire that occurred in 1961. It was considered by many to be an elitist attack on programmers and viewers who enjoyed lowbrow or escapist fare.

Fun Fact: The writers of the 1964-1967 TV series Gilligan’s Island named the tour boat that ran aground the S.S. Minnow as a sarcastic reference to his name.

Minow doesn’t seem to mind. When asked what he considers his most valuable contribution, he mentions convincing Congress to pass laws that paved the way for communications satellites. He recalls telling President Kennedy, “Communications satellites will be much more important than sending man into space, because they will send ideas into space. Ideas last longer than men.”

Minow still influences communications-related law as senior counsel at Chicago-based law firm Sidley Austin LLP.  In 1988, he recruited Barack Obama to work there as a summer associate where he met his future wife, Michelle Robinson. He supported Obama’s campaign for presidency and reelection.

He’s received 12 honorary degrees, sat on too many boards to mention, written four books, funded Sesame Street, and co-sponsored the Digital Promise Project, which uses the Internet to further education. He also serves as Honorary Consul General of the Republic of Singapore.

If given the chance to meet Mr. Minow, we would ask him a question that might show our own lowbrow tendencies. But, admit it: Don’t you want to know what he thinks of the Kardashians? 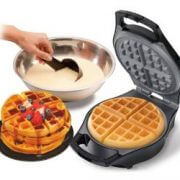 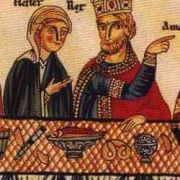 May 10 is Clean Up Your Room Day
Scroll to top