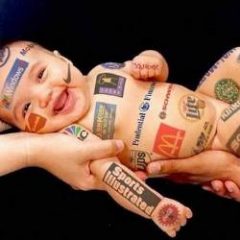 Today is Corporate Baby Name Day. On August 6, 2001, AmericanBaby.com, an online resource for pregnancy and parenting advice, announced the results of a survey it had recently conducted. The poll asked six hundred respondents if they would sell the right to name their baby for $500,000—to a corporation.

We’ve learned about many odd baby names over the years and tried our hand at tongue-in-cheek baby name generators here and here, but we’ve never seen anything like this

Twenty-one percent stated they were willing to allow a conglomerate to brand their child “Pepsi,” “Friskies,” “Mop’n’Glo,” “Kleenex,” “Budweiser,” “Jeep,” “Windex,” “Tropicana” or any product featured on the shelves at eye-level in the supermarket. Twenty-eight percent indicated they weren’t sure but would consider it.

The site created the study because of a couple in New York State who tried to auction off the name of their newborn boy on eBay. The bidding started at $500,000; there were no takers. They finally named him Zane on August 6, 2001, the deadline to add the first name to his birth certificate.

We wonder how many companies would pass up that opportunity today. No one would have it worse than the teacher at recess: “Taco Bell, stop picking on Charmin! Don’t make me come over there!”