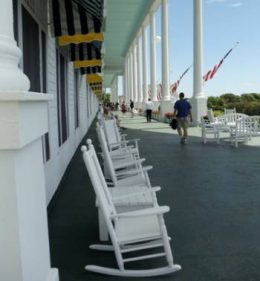 Grand Hotel porch: made for rockin’ and strollin’

The first official saunter reportedly took place at Michigan’s Grand Hotel on Mackinac Island. Participants strolled across the 660-foot porch, which the hotel claims is the longest in existence.

W.T. Rabe invented the holiday in 1979 in response to what he saw as an alarming rise in the popularity of jogging.

He saw World Sauntering Day as a way to counteract the tendency to rush through life, to remind people to slow down and enjoy themselves.

“You don’t care where you’re going, how you’re going or how long it takes to get there,” Rabe explained. “The idea is to smell the roses and to pay attention to the world around you.”

That wasn’t Rabe’s first contribution to the world of wacky holidays. In 1976, as public relations director for Lake Superior State University (LSSU), he created the Banished Words List. (Its full name is List of Words Banished from the Queen’s English for Mis-Use, Over-Use or General Uselessness.) The college receives nominations for banishment from around the world, covering all manner of words and phrases worthy of exile.

W.T. Rabe passed away in 1992. We wonder if he had any idea just how prescient his tongue-in-cheek creation was; how much we would all need to pause, look up from our screens, forget the to-do list and amble, mosey and sashay through our day.