Today is Towel Day, created to honor Douglas Adams, author of the beloved Hitchhiker’s Guide to the Galaxy series, after he passed away on May 11, 2001, at the age of 49. It took fans two weeks to organize a worldwide tribute to Adams. May 25th has remained Towel Day ever since. 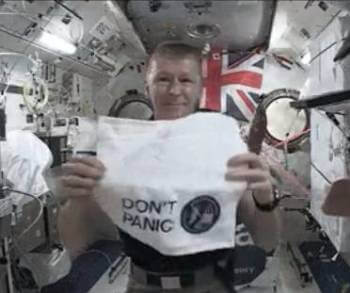 Why is it called Towel Day? The towel is an indispensable part of a hitchhiker’s kit. Here is a portion of the explanation in Chapter 3 of the first novel:

A towel … is about the most massively useful thing an interstellar hitch-hiker can have. Partly it has great practical value. You can wrap it around you for warmth as you bound across the cold moons of Jaglan Beta; you can lie on it on the brilliant marble-sanded beaches of Santraginus V, inhaling the heady sea vapours; you can sleep under it beneath the stars which shine so redly on the desert world of Kakrafoon; use it to sail a mini-raft down the slow heavy River Moth; wet it for use in hand-to-hand-combat; wrap it round your head to ward off noxious fumes or avoid the gaze of the Ravenous Bugblatter Beast of Traal (such a mind-bogglingly stupid animal, it assumes that if you can’t see it, it can’t see you — daft as a brush, but very very ravenous); you can wave your towel in emergencies as a distress signal, and of course dry yourself off with it if it still seems to be clean enough.

What is the answer to Life, the Universe and Everything (third in the Hitchhiker’s series)? Plug this into Google Search to find the answer….

May 24 is International Tiara Day

May 26 is Sally Ride Day
Scroll to top