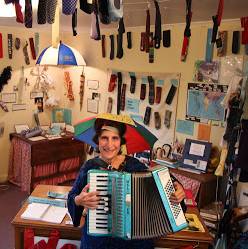 Today is Umbrella Cover Day. Although the holiday got its official start in 2014, its roots reach back to 1996, when Maine native Nancy 3. Hoffman founded the Umbrella Cover Museum, dedicating it to “the appreciation of the mundane in everyday life” and “finding wonder and beauty in the simplest of things.”

Hoffman changed her middle name from Arlene to Three in 1992 after a typographical error on a form gave her the idea; she likes that “3” is universal to every language and needs no translation. She heads up an accordion band known as The Maine Squeeze. Her one-woman performance of “The Mikado” by Gilbert and Sullivan was once produced at Scotland’s Edinburgh Fringe Festival.

Many years ago, Hoffman explained her inspiration for the museum in her book Uncovered and Exposed:

I was cleaning out my house one day, and discovered that I still had all of the covers from all the umbrellas I’d ever bought (Seven or so.) That got me thinking. Then one day, around 1992, I was in a dime store and I stole a cover off of an umbrella…just the cover. Then I knew I was hooked. After that I started planning the Museum and soliciting donations for the exhibits.

In 1996, the Umbrella Cover Museum opened its doors—more specifically the door to her kitchen, where the covers were displayed.  Eventually, the collection grew so large she moved it to its current two-room location on Peaks Island, Maine.

The museum is open during summer months. (Hoffman winters in Key West, Florida.) Guided tours are available. The curator/director serenades lucky visitors with her rendition of “Let a Smile Be Your Umbrella” while accompanying herself on accordion.

For several years, Hoffman petitioned the Guinness Book of World Records to add a new category for umbrella sleeves. Guinness finally acquiesced, scheduling an official count on July 7, 2012. News of the upcoming event brought donations from around the world.

By the day of the event, the museum housed covers hailing from forty-eight countries. According to Guinness rules, to attain a record for highest number of an object, the total must exceed 500. Handmade covers and duplicates were not allowed in the tally. Hoffman sailed into the record books with 730.

Hoffman is always happy to accept umbrella covers. She is currently soliciting monetary donations to “send the museum to England.” (Per the site, contributions are not tax-deductible at this time.) As a matter of national pride, we hope she intends to do a temporary installation over there and returns to Maine.

On a scale from “Honey, get the pitchfork” to “She’s not hurting anyone,” Hoffman occupies the “lovable eccentric” zone. Maybe we shouldn’t need her Umbrella Cover Museum to make us see the beauty of simple, seemingly worthless things, but don’t we? 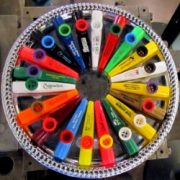