Today is George Spelvin Day. Who is he, and why does he have his own day? He was “born” on November 15, 1886, and is still going strong. How is that possible?

George Spelvin began as a pseudonym used in theatrical playbills to hide the fact that a performer was “doubling“—playing two roles in a play or musical. Actors changed costumes and makeup, sometimes adding a second, disguised photo to the program, all to (hopefully) fool theatergoers. Listing a player’s name twice would ruin the effect.

Sometimes a playwright or director added a fictitious actor and role to the cast list to trick audience members into thinking the character would appear. This misdirection could make a plot twist or other device harder to figure out and thus more effective and entertaining.

George Spelvin first appeared on a Broadway Playbill on November 15, 1886, opening night of Karl the Peddler, a play by Charles A. Gardiner. In 1906, Winchell Smith “cast” him in Brewster’s Millions. After the show’s success, Smith considered Spelvin a good luck charm and added him to many other shows.

Spelvin appeared in the credits of films such as D.W. Griffith’s Birth of a Nation (1915) and the Academy Award-winning From Here to Eternity (1953). He showed up on television and soap operas, including The Guiding Light and Edge of Night. He called himself George Spelvinsky, Georges Spelvinet, Giorgio Spelvino or Gregor Spelvanovich for European roles.

Although doubling has lost its stigma, pseudonyms remain popular. Actors’ Equity Association members wishing to work under a non-union contract may use alternate names to avoid fines and possible revocation of union membership. Performers who become unhappy while shooting a movie may try to substitute a false name in the credits, to disassociate themselves from a potential box office bomb.

The Spelvin name has grown so well-known that it has become an in-joke for sophisticated audiences. (Alan Smithee, used by disgruntled directors, enjoys a similar status among moviegoers.) Spelvin’s British counterparts are Mr. F. Anney, Mr. Bart and Walter Plinge, who has his own holiday on December 2nd.

Have a happy George Spelvin Day! 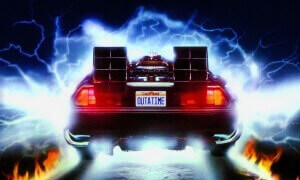 Back to the Future Part II was released in 1989. In it, Doc Brown (Christopher Lloyd) utters the following line as he and Marty McFly (Michael J. Fox) travel through time in his trusty DeLorean: “We’re descending toward Hill Valley, California, at 4:29 pm, on Wednesday, October 21st, 2015.”

While the time machine has not been perfected—as far as we know—some of the “technology” dreamed up for the movie has come to fruition. When Nike was offered product placement, execs imagined a pair of sneakers with self-tying laces. To celebrate the date when the real world caught up to the movie’s timeline, Nike created a working pair of Air Mags with self-tying laces and delivered them to Fox on October 21, 2015. 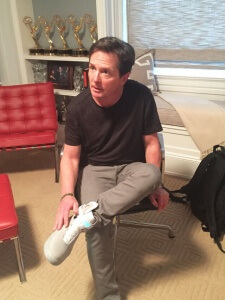 For Back to the Future Day 2016, it produced 89 pairs of the sneakers and raffled or auctioned them off, raising more than $6.75 million dollars for the Michael J. Fox Foundation for Parkinson’s Research.

The quest to create a hoverboard like the one McFly rides in the movie has been less successful. One prototype levitates over a special surface, has a battery that lasts less than two minutes and is so hard to steer that one reviewer simply spun around until someone came to his aid. Still, its maker produced 10 and sold them for $10,000 each. 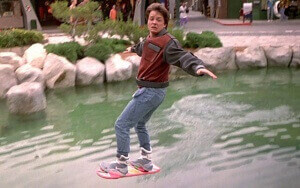 Most hoverboards could be called HINOs (Hoverboards In Name Only). They are self-balancing scooters with wheels, like a Segway without handlebars. Many models have batteries that can overheat and burst into flame while being charged or ridden, presenting a potentially exciting yet possibly disastrous experience for riders. We’re still waiting for the real thing. 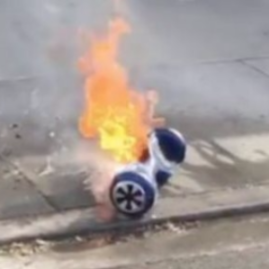 Without a doubt, one of the things Future fans will discuss for years to come isn’t a product but a “prediction” made as a joke by screenwriter Bob Gale. In Back to the Future Part II, the Chicago Cubs beat Miami to win the World Series on October 21, 2015.

Gale, a St. Louis Cardinals fan, later said he was trying to come up with something completely outrageous that could only happen in a fictional universe. He also pointed out that Miami had no team in 1989: “People don’t automatically realize when they watch the movie today, but we were predicting there would be a major league team in Miami.” 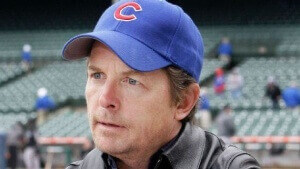 In reality, on October 21, 2015, the Cubs played the New York Mets in the fourth game of the National League Championship Series and lost. (The Mets swept all  four games, obviating the need to continue the seven-game series.)

The Major League Baseball schedule has changed since the movie came out, which explains why the timing of the World Series isn’t quite right. 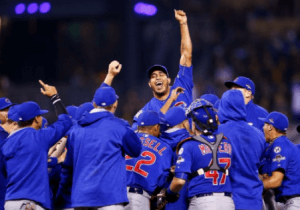 The story doesn’t end there. On November 2, 2016, the Chicago Cubs defeated the Cleveland Indians to win its first World Series since 1908. Coincidence or fate a year late? You decide.