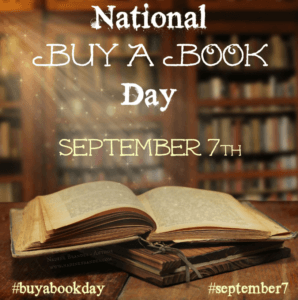 Today is National Buy a Book Day, created in 2010 by author Philip Athans to support bookstores, writers and the publishing industry. He chose September 7 as the date of its observance because it falls on his birthday.

Athans described his inspiration in science fiction/fantasy blog Grasping at the Wind:

It started with a tweet, which warned of more layoffs ahead at Borders. I know a few people there, and one of them told me, “I’m only speculating, but I really think that unless Borders has a huge holiday sales run, they’ll be looking at bankruptcy by the early part of next year. I hope I’m wrong. And unless things change, it wouldn’t surprise me if B&N shares the same fate in a few years.”

David Magee of the International Business Times had this to say in 2011:

So many customers liked to flip through some books, maybe even buying one every now and then. But Borders stores occupied 25,000 square feet on average, and it’s hard to make a profit renting some of America’s prime real estate at that level when people primarily enjoy looking at the only product you have to sell.

In other words, bookstores in America have become more park-like for many consumers than action-oriented book buying spots…The stores would have been great if they were truly park-like, with government subsidies filling in for the lack of profit…

It’s sad, yes. It’s also the reality of this day. Bookstores have become park-like for many, a place to relax and look. But active buying is required to keep them open.

These gentlemen’s dire predictions edge ever closer to becoming reality. Get out there today, find a store that sells books: paperbacks, hardcovers, even books of daily affirmations will do, if you must. Athans suggests you buy a book written by a living author so he or she can profit from the sale.

Feel free to post the title of the book you bought—or the book you’ve written—in the comments. We’re lacing up our sneakers now to embark on our own quest.