The 50th Annual Barbed Wire Festival kicks off this evening in La Crosse, Kansas. The first convention for collectors of barbed wire was hosted there in 1967. According to the festival’s website, 2,000 people attended, earning La Crosse, described by Wikipedia as a “city” of 1,342, the title of  “Barbed Wire Capital of the World™.”

The site is a bit sparing with details about today’s festivities, stating only, “The ceremony will begin at 5:00 pm with an olympic-style opening ceremony for the 50th Annual Festival.”  (We’re guessing that in this case, the eternal flame will be represented by two books of matches and a can of Sterno.)

Next, a monument to departed supporters will be unveiled at its location by the sidewalk in front of the Kansas Barbed Wire Museum. The dedication will be followed by a meeting of the Antique Barbed Wire Society, the only international organization devoted to the collection, preservation, exhibition and cultural appreciation of barbed wire.

Friday’s program features an exhibition of vintage military garb; displays of wire fence and collectibles will be judged. (Note to newbies: Don’t collect wire under 18 inches long. Anything shorter is worthless.) The evening will be capped off with the “Kansas Barbed Wire Museum Casino Night and Mexican & More Buffet.” Proceeds will benefit the Museum Operating Fund.

Saturday’s main event is the 50th annual “World Champion Barbed Wire Splicing Contest™. ” Contestants begin with double strand, two-point galvanized barbed wire and must splice in a third strand, twisting it using only their hands. (Gloves are allowed.) Finished wires must be able to support a 75-pound weight. There’s a Powder Puff version for women. All the requirements are the same but the gender bias is thrown in for free.

Attendees who are plumb tuckered out can look forward to the Golden Memories Candlelight Banquet, a gourmet meal “featuring the finest cuts of beef, fabulous trimmings, salad, and dessert.” (In this context, “trimmings” sounds suspiciously like “fixins.”) Following the meal, there will be a short awards ceremony. The site promises, “This will be our finest banquet yet. Black tie optional.” A sigh of relief goes up from those who forgot to pack their tuxedos. Or their special Sunday-go-to-meeting shorts.

Five more shows are scheduled this year in California, Texas, Colorado, Nebraska and Kansas. In the autumn, La Crosse will host the “Miss Barbed Wire Capital Pageant & Variety Show.” The first Barbed Wire Collector magazine was issued in 1983. It is published six times a year by the Antique Barbed Wire Society to inform and entertain barbed wire aficionados between functions. 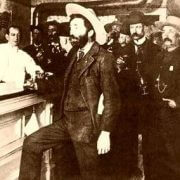 July 8 is the Soapy Smith Wake

May 7 is Mother Ocean Day
Scroll to top