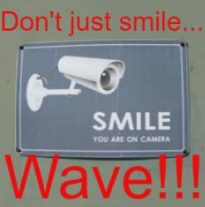 Today is International Wave at Surveillance Day, created in 2001 by privacy activist Zorbitor to provide “a chance for the watched to reach out to the watchers both at home and in public venues.” First, a little history is in order.

In 1942, the surveillance camera was invented by German engineer Walter Bruch and installed by Siemens AG to observe the launch of V-2 rockets.

In the U.S. the first closed-circuit television system (CCTV), Vericon, was introduced in 1949. It required constant monitoring because there was no way to record and store information. As video cassette recorder (VCR) technology became widely available, surveillance became more practical. Tapes could be saved for later playback or erased and reused.

Cameras were placed in New York’s Times Square in 1973. In the decades that followed, video surveillance spread across the country, especially in public and theft-prone areas. In 2005, the New York Civil Liberties Union tallied 4,176 cameras below 14th Street. London has approximately 500,000, while the UK as a whole has more than 4 million.

Of course, waving at a camera would be largely ceremonial given that modern surveillance systems are automated and thus incapable of appreciating irony, sarcasm, snark or a friendly greeting. Chances are, we wouldn’t get any attention from the spy satellites whizzing over our heads either—but they’re there.

On March 5, 1946, a secret treaty called the UKUSA Agreement created a worldwide network of listening posts run by the US National Security Agency (NSA) and UK Government Communications Headquarters (GCHQ).

The countries agreed to exchange intelligence gathered from the interception and translation of foreign correspondence. One passage stated: “It will be contrary to this agreement to reveal its existence to any third party whatever.”

In 1964, FVEY established the International Telecommunications Satellite Organization (INTELSAT), which would go on to own and operate a fleet of satellites under the guise of civilian control . In 1966, the first satellite of the new ECHELON system was launched into orbit.

In 1970, GCHQ set up a secret signal station in Morwenstow near Cornwall, England, to intercept satellite communications over the Atlantic and Indian Oceans. Soon afterward, the NSA built a station in Yakima, WA, to begin interception over the Pacific Ocean.

Most reports on ECHELON focus on satellite interception, which has dwindled to a small percentage of traffic. It has been revealed that the program also employs other means to monitor all landline and cellular telephone calls, email, faxes and texts and augments them by purchasing information from corporate entities.

Modern fiber optic cables deliver data much more efficiently than satellites ever could. Advances in technology, convenient for consumers, are a boon to those who vacuum up information. Most of us carry mobile phones at all times, emailing, texting, surfing, sometimes even talking.

To eavesdrop on terrorists, druglords and hostile foreign governments, ECHELON must capture everyone’s communications and use its supercomputers to analyze them for keywords. That can lead to mistakes such as the listing of a woman as a possible terrorist after she called a friend and told her that her son had just “bombed” in his school play.

Fear of terrorism since September 11, 2001, has led many to believe security and privacy are mutually exclusive. No matter where anyone stands on that issue, one thing is clear: The apparatus used to surveil everyone was in place long before that attack.

Can you hear me now?

In the US, the NSA grabs three billion conversations each day and stores the “metadata”—phone numbers, date and time, length of call—for 18 months. Spoken conversation is legally protected; the audio is not supposed to be monitored. (The experience of that mom would seem to put the lie to that.) NSA computers also capture every out-of-country call and email to or from a US citizen. In this case, the content is considered fair game. Agents are authorized to read or listen to any of them.

When paired with public information on services such as Google, Yelp and Facebook—which is not subject to the same legal protections as phone calls—Stanford researchers were able to use metadata to identify names, partners, pregnancies and medical problems as well as calls to gun stores, head shops and prostitutes.

In 2013, after Edward Snowden‘s act of whistleblowing, treason or both,  Stewart Baker, former general counsel for the NSA, admitted,  “Metadata absolutely tells you everything about somebody’s life.”

NSA’s annual budget includes $250 million dollars for “corporate-partner access,” a term of art for its payments to acquire material compiled on corporate computers. It collects so much data that it maintains 700 servers at 150 sites.

On August 13, 2016, a group calling itself the Shadow Brokers announced it had hacked Equation Group, which allegedly carries out cyber attacks on behalf of the NSA. It proved its claim by releasing two sets of highly sophisticated malware and hacking tools used by Equation Group and promises to sell the rest for $1 million in Bitcoin—roughly $574 million US dollars.

We must admit we don’t feel much like waving, and not just because today’s observance has been called the laziest protest ever. During our research, we’ve conducted 28 Google searches and read 47 posts at 34 sites, excluding Wikipedia entries. We suspect that even if we don’t wave at surveillance today, it may be waving, however briefly and figuratively, at us.

Try to have a happy International Wave at Surveillance Day. We can all blame Zorbitor if we end up on a no-fly list. 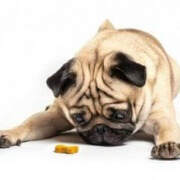