Today is Mudd Day. It commemorates the birthday of Dr. Samuel Mudd, who was accused of conspiring to assassinate President Abraham Lincoln and hiding his killer, John Wilkes Booth, after the fact. 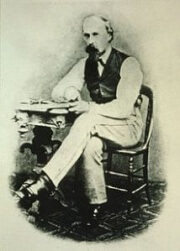 After killing Lincoln on April 14, 1865, Booth fractured his fibula when he jumped from the president’s box seat to the stage of the Ford Theater and fled the scene. He and co-conspirator David Herold rode on horseback to Dr. Mudd’s house, arriving in the middle of the night. Mudd splinted Booth’s leg and let the men rest in a bedroom upstairs. They were at the house for at least twelve hours before leaving in late afternoon to continue their flight.

(The fugitives were cornered two weeks later in a Virginia tobacco shed by Union cavalry. Herold surrendered. Booth refused. Soldiers set the shed on fire and shot Booth as he tried to escape the flames.)

It’s possible Mudd didn’t know about the assassination. He went into town to run errands during the day of April 15th and certainly would have learned the news then. But he failed to report Booth’s visit for another twenty-four hours.

Authorities found Mudd’s hesitation suspicious. His inaction certainly allowed the men more time to escape. Under interrogation, he changed his story several times. He may have done so due to the stress of being questioned. He was arrested on April 26th, coincidentally the same day Booth was killed and Herold taken prisoner.

On June 29, 1865, Mudd was found guilty of conspiring to murder President Lincoln. He was sentenced to life in prison, escaping the death penalty by one vote. Four of the convicted, including Herold, were hanged eight days later.

Mudd was pardoned by President Andrew Johnson and released from prison in 1869. He died of pneumonia on January 10, 1883. Despite ongoing efforts to have his record expunged, Mudd’s conviction has never been overturned. A Facebook page is dedicated to clearing his name and his home has become a museum.

One thing is clear, however. The phrase “your name is mud” has no connection to Dr. Mudd. Use of the word “mud” to label things as worthless or unwholesome dates back as far as the 16th century. Its usage was later applied to people, as documented in a 1703 description of London’s low life, Hell upon Earth:

The following citation appeared in an 1823 dictionary of slang terms.

Mud – a stupid twaddling fellow. ‘And his name is mud!’ ejaculated upon the conclusion of a silly oration, or of a leader in the Courier.

Oddly, “mud” was also used as a general intensifier. There are many published examples of “as fat as mud,” “as rich as mud,” “as sick as mud” etc. Eventually, the meanings coalesced into an epithet that insulted a person’s worth and identity, and sometimes carried a threat of violence. “Your name is mud” has been in use ever since.