Today is National Hugging Day. The holiday was created in 1986 by Reverend Kevin Zaborney, whose National Whiner’s Day is a favorite here at Worldwide Weird Holidays.

National Hugging Day has gained worldwide popularity and is celebrated in countries including Canada, England, Germany, Sweden, Australia, Bulgaria and Guam. In light of this, many suggest changing the holiday’s name to International Hugging Day.

Each year, Reverend Zaborney singles out a champion hugger for praise. His award for the Most Huggable Person of 2016 went to Tim Harris. 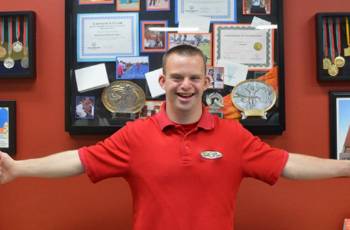 Tim Harris is a Special Olympian with Down Syndrome. (He happened to turn 30 years old on January 21, 2016.) Until recently, he owned Tim’s Place in Albuquerque, NM where, he said, “The most sought after item is one that never gets cold, is sweet but not too sweet, guilt-free, calorie-free, and guaranteed to brighten your day…a free hug from Tim himself. Our concept is breakfast, lunch and hugs seven days a week!”

Tim hosted his first Hug-A-Thon in 2014. He hugged more than 1,000 people and raised $6,000 for non-profit Firefighters Random Acts. (He also hugged a certain world leader that year.) 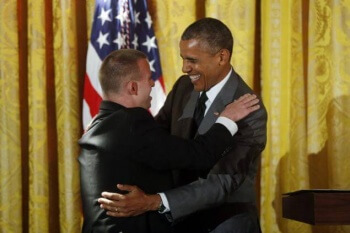