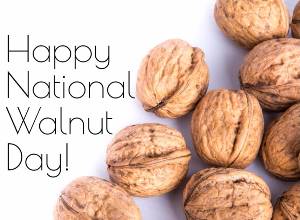 Today is National Walnut Day, created in 1949 by the Walnut Marketing Board. The holiday was affirmed in 1958 by the official proclamation of President Dwight D. Eisenhower.

According to Harpers’ Latin Dictionary, the genus gets its name from the Latin word for walnut tree,  jūglans, which is a contraction of  Jōvis glans, which translates to “nut of [the god] Jupiter.” Perhaps that explains why many sites claim the arginine found in walnuts dilates blood vessels and increases blood flow, causing erections. (Don’t munch a handful before a business meeting.)

Black walnut has been hailed by some as a miracle cure because of its alleged ability to kill a parasite that is supposedly responsible for cancer. No word on whether it works: We can’t get anyone who used it to answer our calls.

In China, walnuts are prized for a different reason. Reuters reported in 2012 that a secondary market in “cultural playthings” had emerged as a result of weak or negative returns in the traditional stock market.

Once the toys of China’s imperial court, walnuts have become popular among the wealthy, who see them as a status symbol as well as an investment. They are collected in pairs and rotated in one’s hand to improve circulation.

Collector Kou Baojun in Beijing told Reuters that the larger, older and more symmetrical the walnuts are, the more highly they are valued and can cost tens of thousands of dollars. He owns more than 30 pairs, most of which are over a century old and have become burnished from years of being polished in the palm.

“Look how well these have aged,” Kou said. “Playing with these kinds of walnuts isn’t for ordinary people.”

Grab a pair and have a happy National Walnut Day!

May 18 is I Love Reese’s Day
Scroll to top