Today is Rube Goldberg Day. On July 4, 1883, Reuben Garrett Lucius “Rube” Goldberg was born in San Francisco, CA. In his 87 years on the planet, he was a cartoonist, engineer, inventor, author, sculptor and scriptwriter.

He is best known for his cartoons depicting absurdly complex contraptions used to perform simple tasks. One such device was an intricate system, triggered by the movement of a spoon, that would automatically mop one’s upper lip after taking a sip of soup as seen in the following commemorative stamp. 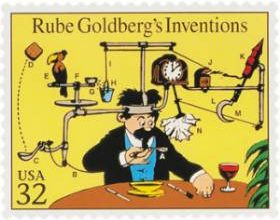 As an engineer and inventor, Goldberg often brought these cartoons to life. In 1930, he wrote and made a cameo appearance in a film called Soup to Nuts which featured some of his crazy machines and starred the men who would later become known as the Three Stooges.

In 1948, Goldberg was awarded a Pulitzer Prize for his political cartoons. Few knew his work had aroused such anti-Semitic hatred during the war that he had insisted his sons change their surnames. They chose the last name George and it has remained the family name ever since; their children run a company called RGI (Rube Goldberg Incorporated) to continue their grandfather’s name. 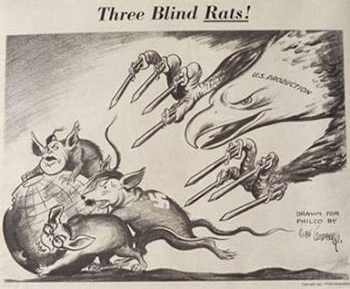 Goldberg was a founding member and the first president of the National Cartoonists Society, the namesake of its Reuben Award, given to the Cartoonist of the Year. He is the inspiration for various international competitions, known as Rube Goldberg Machine Contests, many of which are sponsored by his descendants through RGI.

He is also immortalized in the Merriam-Webster Dictionary:

February 18 is Cow Milked While Flying in an Airplane Day