Today is National Nutty Fudge Day. Where did this tasty treat originate and how did it get its name?

The creation of American-style chocolate fudge is often credited to student Emelyn Hartridge and her Vassar Fudge recipe. She later revealed in a letter, preserved in the Vassar College Archives, that she had cheated:

Fudge, as I first knew it, was first made in Baltimore by a cousin of a school mate of mine. It was sold in 1886 in a grocery store for 40 cents a pound and my brother Julian bought me my first box. … I secured the recipe and in my first year at Vassar I made it there — and in 1888 I made 30 pounds for the Senior Auction, its real introduction to the college, I think.

Miss Hartridge neglected to name the school chum, her cousin or the store that sold it in Baltimore. The paper trail ends there, so we’re unable to determine who invented fudge, or at least its chocolate incarnation. Was it a happy accident, a confectionery miracle, or a product of diligent trial and error? We may never know.

It’s also unclear how fudge earned its name. Delving into the history of the word reveals no easy answers. According to the Online Etymology Dictionary, the use of fudge as a verb meaning to “put together clumsily or dishonestly” dates to 1771. The word itself may have derived from fadge, “to make suit or fit,” used since the 1570s.

In 1664, Samuel Pepys, whose diaries are used by scholars to illuminate the English Restoration period, wrote of Captain Fudge, a merchant seaman he had engaged to take goods to Tangier before the discovery of his “knavery and neglect.”

After finding the condition of the ship, no master, not above four men, and many ship’s provisions, sayls, and other things wanting, I went back and called upon Fudge, whom I found like a lying rogue unready to go on board, but I did so jeer him that I made him get every thing ready….I confess I am at a real trouble for fear the rogue should not do his work, and I come to shame and losse of the money I did hope justly to have got by it.

We don’t hear of Captain Fudge again so perhaps he acquitted himself well. But is he the reason “fudge” became a derogatory verb? A pamphlet called Remarks on the Navy, printed in 1700, had this to say:

There was, sir, in our time, one Captain Fudge, commander of a merchantman, who upon his return from a voyage, how ill-fraught soever his ship was, always brought home his owners a good cargo of lies; so much that now, aboard ship, the sailors, when they hear a great lie told, cry out, ‘You fudge it!’

It seems possible that a seaman derelict in his duties may have influenced the English language. As for who invented delicious, sugary fudge: Who cares? Let’s eat some and call it a day. (Well, it is already a day.) If you’re not a fan of nuts, hang in there. National Fudge Day is June 16th! 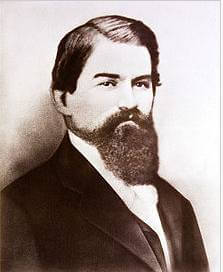 Today is Have a Coke Day. The first glass was sold for five cents at Jacob’s Pharmacy in Atlanta, GA, on May 8, 1886. The story of one of the most popular beverages on Earth began at the end of the American Civil War.

Confederate officer and Freemason John Stith Pemberton was slashed across the chest by a Union soldier’s saber and treated with morphine, to which he became addicted. When he returned after the war to his job as a druggist, he became obsessed with finding a substitute.

In 1885, he formulated French Coca Wine, using coca leaves and caffeine-rich kola nuts. When the mixture of cocaine and alcohol was ingested, it created a third substance called cocaethylene which heightened the euphoria experienced from the use of cocaine alone.

Pemberton didn’t invent the drink himself; he used the two-year-old formula of a Parisian chemist named Angelo Mariani, whose Vin Mariani was so beloved that he was awarded a gold medal by Pope Leo XIII.

Pemberton marketed his version as a nerve tonic ideal for “scientists, scholars, poets, divines, lawyers, physicians, and others devoted to extreme mental exertion” as well as “a most wonderful invigorator of  the sexual organs” and a cure for morphine addiction.

When early prohibition laws were passed in Atlanta, he removed the alcohol and developed Coca-Cola as a patent medicine to be mixed at pharmacy soda fountains, which were popular because of the belief that carbonated water was good for health.

Not long after Coca-Cola’s debut, Pemberton became ill. Ironically, he was nearly bankrupt due to the high cost of his ongoing morphine addiction; as a result, he began to sell the rights to his formula but tried to retain a share of ownership to pass on to his son, Charles. But his son wanted the money instead so they sold what was left to business partner Asa Candler.

John Pemberton died of stomach cancer on August 16, 1888, at age 57. Charles attempted to sell and popularize an alternative to his father’s formula but died six years later, an opium addict himself. 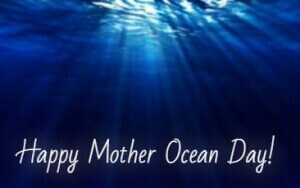 Today is the fourth annual Mother Ocean Day. It takes place on the day before Mother’s Day and spotlights the magnificent bodies of water that make life on Earth possible.

Begun in 2013 in Miami, Florida, the holiday’s goal is to bring attention to the challenges we face as a consequence of  our use and abuse of the planet.

Participants observe this day by tossing roses on the water, from the shore or sea vessels. While throwing things into the ocean to raise awareness of the dangers of pollution may seem a bit wrongheaded, at least the flowers are biodegradable. It is also a tradition associated with memorializing the dead and the oceans are still alive, for now.

Coral reefs are the proverbial canary in a coal mine, fragile ecosystems that cannot withstand changes of more than  2° Celsius. With sea temperatures and acidification on the rise due to manmade CO2 emissions, reefs around the world are beginning to die of a process called bleaching.

This may seem a problem only for scuba divers and underwater nature photographers but it is of importance to us all. Reefs protect coastlines, shelter 25% of ocean-dwelling species and support the fishing and tourism industries.

In the future, perhaps a more fitting tribute would be tossing ice cubes into the water.  However you decide to celebrate, have a very happy Mother Ocean Day!

The 50th Annual Barbed Wire Festival kicks off this evening in La Crosse, Kansas. The first convention for collectors of barbed wire was hosted there in 1967. According to the festival’s website, 2,000 people attended, earning La Crosse, described by Wikipedia as a “city” of 1,342, the title of  “Barbed Wire Capital of the World™.”

The site is a bit sparing with details about today’s festivities, stating only, “The ceremony will begin at 5:00 pm with an olympic-style opening ceremony for the 50th Annual Festival.”  (We’re guessing that in this case, the eternal flame will be represented by two books of matches and a can of Sterno.)

Next, a monument to departed supporters will be unveiled at its location by the sidewalk in front of the Kansas Barbed Wire Museum. The dedication will be followed by a meeting of the Antique Barbed Wire Society, the only international organization devoted to the collection, preservation, exhibition and cultural appreciation of barbed wire.

Friday’s program features an exhibition of vintage military garb; displays of wire fence and collectibles will be judged. (Note to newbies: Don’t collect wire under 18 inches long. Anything shorter is worthless.) The evening will be capped off with the “Kansas Barbed Wire Museum Casino Night and Mexican & More Buffet.” Proceeds will benefit the Museum Operating Fund.

Saturday’s main event is the 50th annual “World Champion Barbed Wire Splicing Contest™. ” Contestants begin with double strand, two-point galvanized barbed wire and must splice in a third strand, twisting it using only their hands. (Gloves are allowed.) Finished wires must be able to support a 75-pound weight. There’s a Powder Puff version for women. All the requirements are the same but the gender bias is thrown in for free.

Attendees who are plumb tuckered out can look forward to the Golden Memories Candlelight Banquet, a gourmet meal “featuring the finest cuts of beef, fabulous trimmings, salad, and dessert.” (In this context, “trimmings” sounds suspiciously like “fixins.”) Following the meal, there will be a short awards ceremony. The site promises, “This will be our finest banquet yet. Black tie optional.” A sigh of relief goes up from those who forgot to pack their tuxedos. Or their special Sunday-go-to-meeting shorts.

Five more shows are scheduled this year in California, Texas, Colorado, Nebraska and Kansas. In the autumn, La Crosse will host the “Miss Barbed Wire Capital Pageant & Variety Show.” The first Barbed Wire Collector magazine was issued in 1983. It is published six times a year by the Antique Barbed Wire Society to inform and entertain barbed wire aficionados between functions.